Christmas Is Not Lost!!

What do you know, christmas isn’t lost…it’s in Sri Lanka!!

Apparently it wasn’t the warm weather putting a damper on Christmas it was the lack of festivities.

We landed in Sri Lanka at about 4:00 this afternoon and the first things I notice were these:

Silent Night was playing on the speakers at the airport…followed by Oh Little Town of Bethleham, followed by carol after carol. I brightened immediately.

In the airport there were decorations galore, including a huge creche with the baby Jesus missing of course. I’m sure he’ll show up on christmas eve as usual. There was also Santa and reindeer and fake snow. Crazy, but great!

It immediately feels more like christmas, even though the temperature is 31 degrees and there is a decidedly tropical breeze and ….humidity. These things put Dave in a great mood. He loves it all, including the humidity.

The other immediate observation I had was the women. Of course, I always notice the women. Now, I haven’t talked about this very much yet (and I’m not really going to now) because I don’t feel anywhere near knowledgeable enough to have an opinion on the Qatari women’s dress. I’ve mentioned it right? Their black abayas and different head coverings etc.

I really respect the Qatari people for their religious seriousness and their backbone in holding onto their traditions in a world that sometimes seems ‘west obsessed’. As I see Qatari couples walking together, men in their white thobes and women in their black abayas looking like something out of a history book I feel such admiration for them for not losing their distinctiveness.

As we entered Sri Lanka today I was immediately impressed with the colourful outfits that the women were wearing with their lovely bellies showing. Not all flat, tight tummies either, but lots of spilling over the edges tummies. Another sign of a people group not bending to western pressures of perfection.  It was surprising after being immersed in such a conservative culture were modesty is so highly regarded.

I instantly felt so lucky to be in this world and experiencing all these different people. I absolutely love that we all live on this planet.

This crazy world we live in. I hope we can all get along, let each other have their wonderful cultural differences, be kind to one another, work to understand and appreciate one another and celebrate all that is good. From covering up to …not covering up! All of us. Every one.

I personally love the variety, the breadth and depth, the hope and creativity, the seriousness and the playfulness. expressions of love and goodness. I love to watch for those things, to note them, focus on them. It’s what I’d want others to do when they confront the “other” in me and my differences. Not judge me for them but appreciate the bits they can.

I guess what I’m saying is:

Peace on earth, good will to men. (And by men, we all know we mean women too right?)

Pictures from yesterday (it’s now tomorrow). Sorry, they’re from the phone and some from the window of the car. Today we have the good camera out. 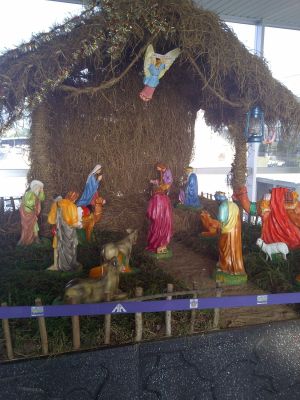 Nativity in the airport

And Santa – picking up some duty free 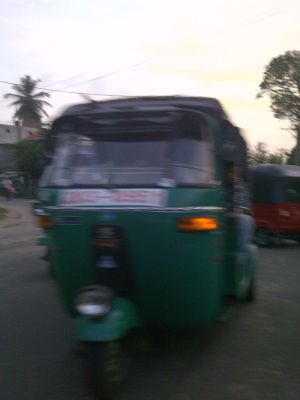 For you Lourdes – Catholicism is alive and well in Sri Lanka!

4 responses to “Christmas Is Not Lost!!”