Dubai – The NYC of the ME

We’ve just finished another week of holidays and we’re back to work today. I woke up this morning and said, “five weeks to the next holiday…and officially counting.” It’s a good life there’s no mistaking it.

Dave and I had a little getaway in Dubai last week, which was a lot of fun. It reminded me of NYC in its ability to take an idea and put it on steroids. People were more accepting of differences, less ruffled by hem lines or hair colours. And it was expensive…just like NYC.

We had a lot of fun in three days. The weather wasn’t the best (I feel a collective Canadian slap upside the head when I say that…but it’s relative…it was windy and dusty and I’m just saying…for this side of the globe…oh never mind).

Here are the pics.

In case you didn’t know, Dubai has the biggest, freestanding structure in the world, by far. We didn’t go up it, we didn’t go in it…but we point to it several times as it loomed on the horizon. And we ate lunch at the foot of it.  Oh, and took some pictures. 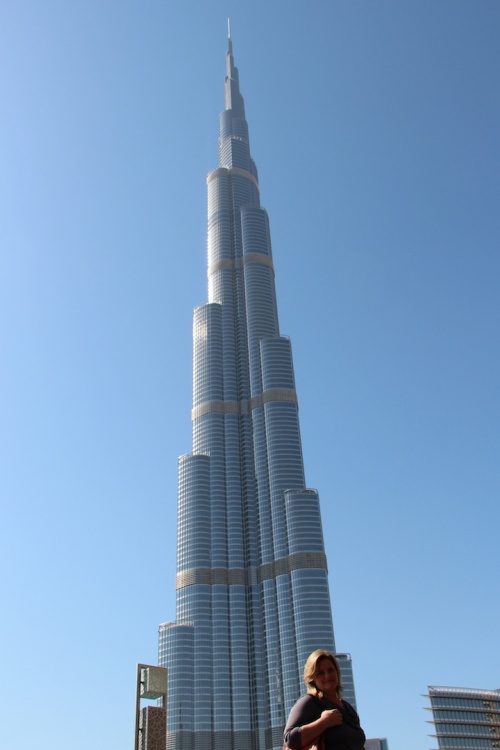 Through the umbrellas at our lunch spot.

The city skyline gives you the idea of just how much taller it is than everything else. I have to say though, Doha’s skyline is much prettier. In my humble opinion.

This gentleman right here might be the best salesman I’ve ever seen, and I’ve seen a few (you know who you are).  He took Dave’s hand and put it in the glove, even though Dave knew exactly what he was up to there was really no saying no. He put the bird up on his should and reached inside Dave’s bag and pulled the camera out and handed it to me. Smooth. Nervy. Brazen…and a few dollars richer. He was hanging out where the Land Cruiser’s that are heading out to the desert stop and let the air out of their tires. Tourists galore. This is a smart man. I bet he drives a fancy car.

And one wasn’t enough…he got a twofer.

Then off to the desert we headed for what’s called ‘dune bashing’. 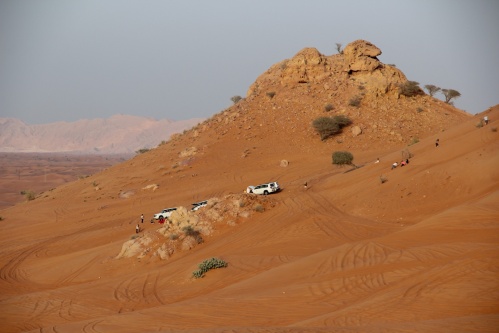 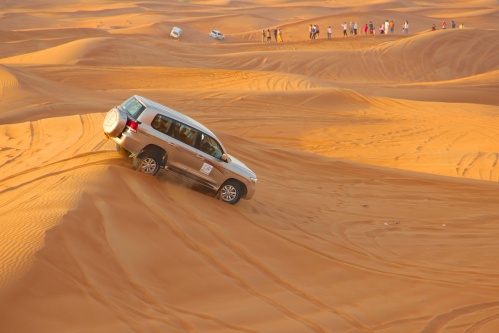 I tried to take some pictures…do you see me in the mirror? But the car moves in such unexpected ways. So much fun, if you’re okay with a little adrenalin rush. 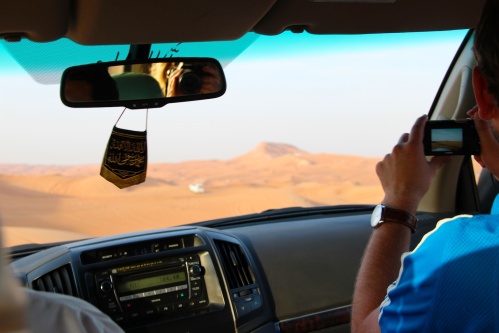 The desert in Dubai is prettier than the desert in Qatar. The sand is a beautiful red colour. Note to my sisters who will be visiting in about a month…we’ll be dune bashing as well (one sister just let out a woohoo! and the other just sucked some air in). The desert is different in Qatar. The dunes are MUCH higher. It’s so much fun. You’re gonna love it. Well, at least one of you is.

A tour goes by behind us. It was a busy day in the desert!

The sun went down as we arrived at a camp out in the desert. They served a traditional dinner and had entertainment.

This guy spun, and acted (while continuing to spin), and morphed into other things and lit up and…for about 15 minutes. Crazy.

And this girl could shake her booty like nobody’s business. There’s rhythm in that body! 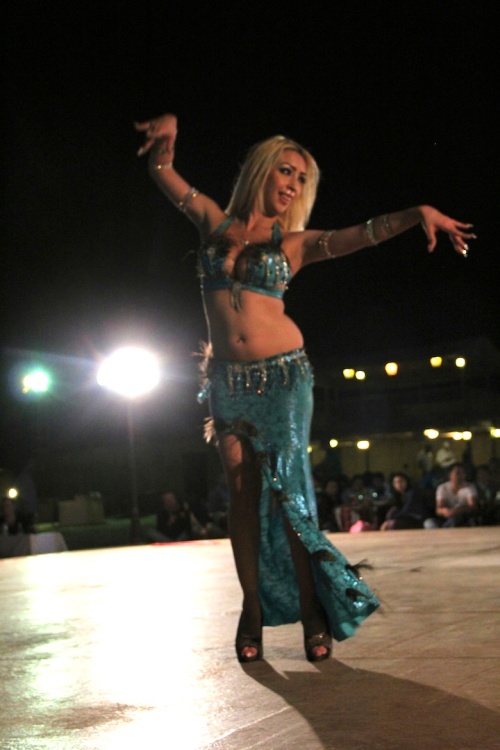 And then it was over. A very nice desert safari indeed. 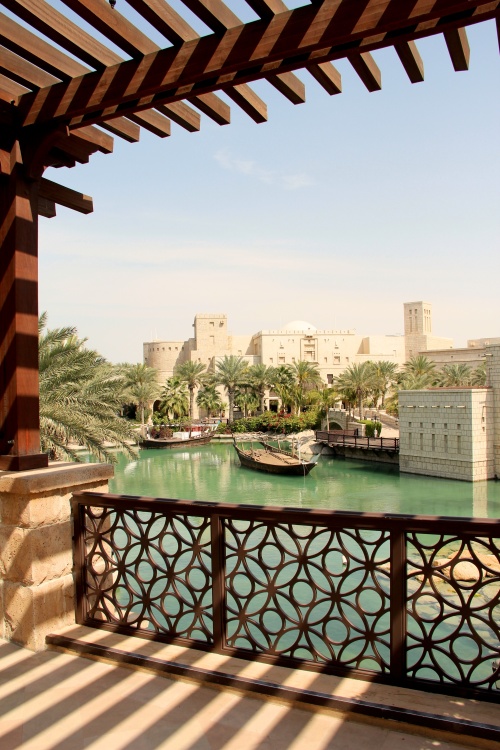 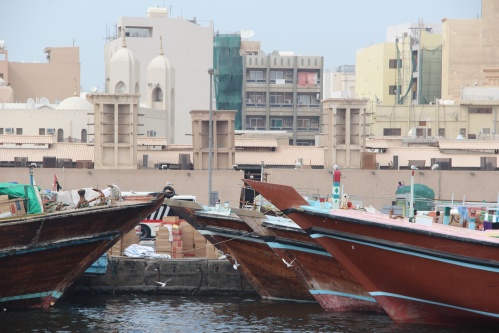 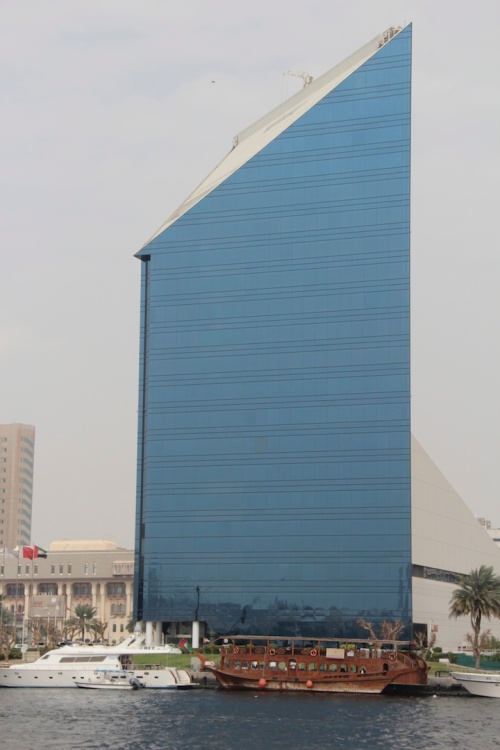 Have you ever heard of a 7 star hotel? This is one. And that’s our lunch. All we can do is eat lunch and look at it. That was expensive enough! 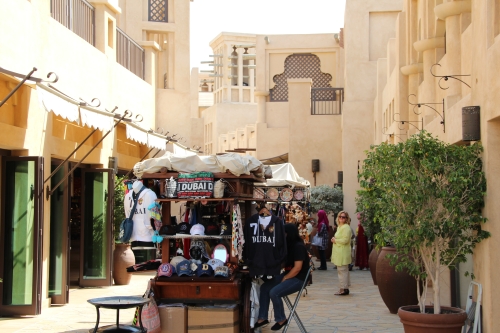 A fountain of divers in one of the amazing malls. 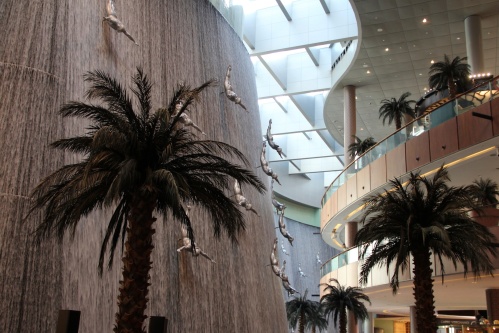 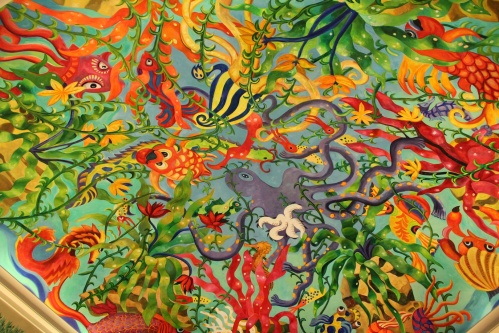